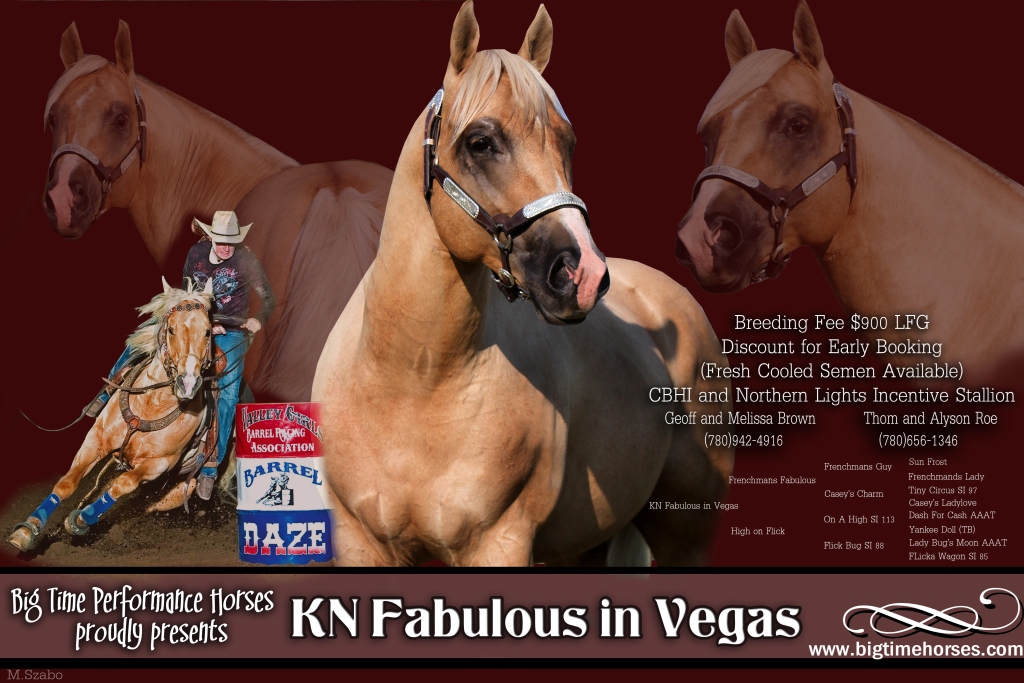 'Vegas' is an own son of 'Frenchmans Fabulous' (2012 Arizona High School Rodeo Girls Horse of the Year),  who was recently featured in the Nov 2013 issue of Western Horsemen Magazine. Vegas was born in Waco, Texas at Nichols Quarter Horses, a fourth generation producer of top performance horses owned by Kenny Nichols.  The history of the Nichols family is rich. Kenny's great grandfather, Ab Nichols owned the legendary running horse 'Clabber'.  Kenny's grandfather, Buck Nichols, owned the legendary rope sire 'Driftwood' and was responsible for starting him in the roping events.  To this day, Kenny maintains these top lines in his breeding stock, which need to be proven performers before they enter his elite band of mares.

'Vegas' is bred to perform.  His 4 grandparents are Frenchmans Guy, Caseys Charm, On a High, and Flick Bug, all of which are legendary producers.  Frenchmans Guy needs no introduction to the barrel horse world.  His progeny have earned over $2 million and he was listed in 2008 as the nation's #3 Leading Barrel Racing Sire, all ages/all divisions.  Caseys Charm was the mother of Bozo, and is featured in the Western Horseman Legends, Volume 6.  On a High was the first Dash for Cash son to win both the All American Futurity and a million dollars.  Flick Bug is listed the #8 leading dam of money earners of all time and is the dam of Mr. Master Bug, six time world champion running horse and winner of the All American Futurity.

As anyone in the performance horse industry knows, breeding is only one side of the equation.  As a four year old, Vegas entered barrel training with Rusty Rae Quam, the 2005 Canadian Finals Rodeo Average winner.  Once he turned five years old, he was entered in futurities in Washington State, Montana, Manitoba and Alberta. His list of accomplishments include: